skip to main | skip to sidebar

It's been so long since there's been a post here, I thought I'd take a few minutes to get something put up. I've been saying that for months now, but I finally forced myself to just do it...

I've been home for a little over 4 months now, and I think I can honestly say it's the happiest time of my life. The past 5 years have been full of ups and downs, but lately everything has been so good. I really enjoy my job, and I love being able to spend time with Shelley and Ryan every day. While I was overseas I tended to not dwell on that absense... and it used to make Shelley crazy. The fact of the matter is, if you spend too much time thinking about what you can't have, it'll drive you crazy. So my solution was just to do the job, and take whatever distractions I could find.

We're leaving for France in a couple of weeks. Shelley's mom is going to come and stay with Ryan, so he's going to get some good "grandma" time. We're really looking forward to the time away, and of course we're going to miss him a lot.

Shannon (Shelley's mom) is going to just be blown away by this little man. Every day he does something amazing to us, even if it's something as simple as getting up on the couch by himself. This morning's thing... the thing that prompted me to run down here and post ... was as he was getting out of the hot tub this morning. We have a bit of a routine for "mimming"; Ryan runs around inside the tub for a while (I'm in there too, of course), and when he's had enough, he goes to the stairs and starts looking for Shelley. He'll say "all done", "ma ma", and "meeeze (please)". Shelley will bring his towel, I'll take off his swim diaper, turn him around, and she'll wrap his towel around him. As she's carrying him away, he'll give me a "bye", and head for the bathroom tub. This morning, Shelley asked him if he wanted to take a shower. He said, "yeah" ... which he says to most anything that he doesn't really understand, and I said "cool". He immediately said, "coo", gave me one more "bye", and off they went into the house.

I think it's safe to say at this point that his three most favorite things are Elmo: 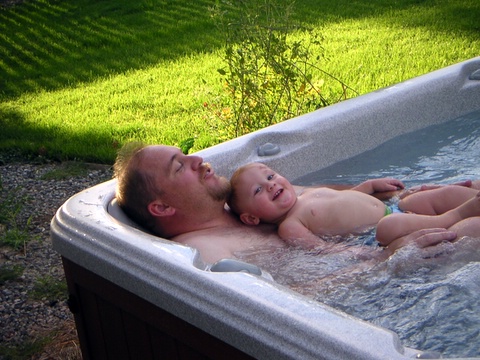 Gotta run, sounds like they're out of the shower!

Posted by Scotti at 9:16 AM No comments:
Newer Posts Older Posts Home