Out with the old: 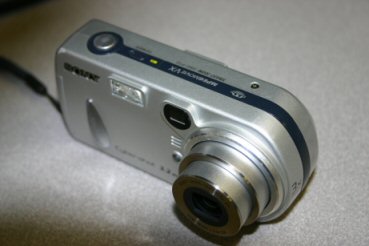 In with the new: 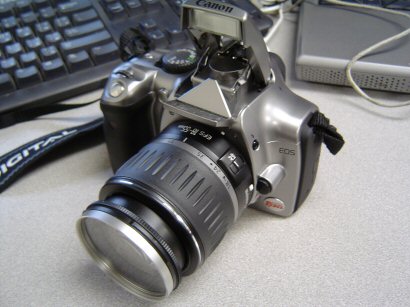 I've taken a ton of pictures already, but nothing that I'm ready to upload yet... But trust me when I tell you, this thing is simply amazing.

More later, too tired (and a little sick) at the moment.

Here's a thought, harass Shelley to update http://grattan.us! She's got things to say... namely how I haven't even been gone 3 months yet and she's already tearing down WALLS in the house! WHOLE WALLS! Sheesh! ;)

So I was on my way to work the other morning, being my usual vigilant self, when I spotted a SUBURBAN full of TERRORISTS!!! There was at least 10 of them in there, all looking at me ... giggling and pointing. Silly terrorists! Fortunately, I was able to take a quick picture for dissemination amongst my fellow contractors. 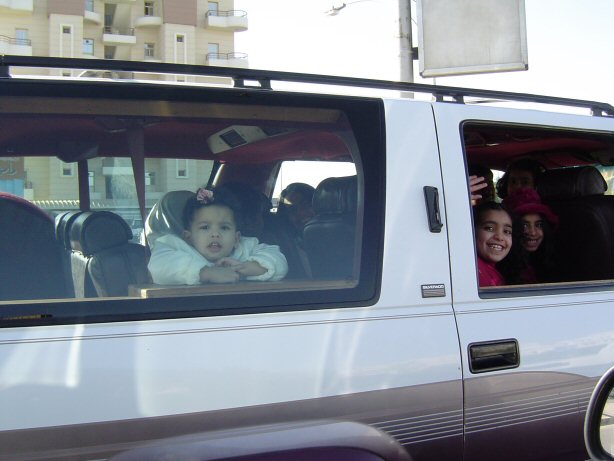 Actually this was very funny. I was waiting at an intersection, with the stereo playing much too loud, when I looked over and saw the cutie in the very back with the bow in her hair smiling and waving. I waved back, and when the other girls saw me they all started giggling and waving too. I grabbed my camera as fast as I could and took the picture. The girl in the front (about 8 years old.. unfortunately I missed her in the pic) said "I LIKE YOUR CAR!". I said "thanks!", then, "How many are in there?" and she just gave me an exasperated look and said, "A LOT!".

Such is my surreal life...

If you've been watching the news in Kuwait, there's been some recent "activity" that has gotten everyone stirred up. Firefights, raids, car chases, searches, etc... The front page of the Arab times shows a Saudi man that was killed in the most recent raid, splayed out and bloody for all terrorists to see and fear! Yes... that's sarcasm you're smelling. Local law enforcement is a complete joke, and these raids finding "explosives and weapons" are more for public relations than anything else. If you do a news search for Kuwait you'll find some interesting accounts of recent events. If you follow the stories backwards, you'll see wildly varying accounts, and very vague descriptions of offenses and proof.

I guess my point here is that it's pretty much status quo here. There have always been a smattering of anti-US feelings here, but it's only been recently that the Kuwait government has felt they need to make a show of "vowing to exterminate terrorists". Hey, HERE's a thought... why don't you try improving your immigration policies and make it just a LITTLE difficult for terrorists to operate here? Just a suggestion. :P

Enough about that crap... on to good news:

Looks like September 2005 is going to be a GREAT month for me! Talk about some great birthday presents: the Firefly movie will be out September 30th, and until then, I can enjoy The Titus Show on DVD!!! The first two seasons will be released on September 5th... 31 episodes! WOO HOO!

Ok, that's all I've got for now. I finally broke down and bought a "real" camera. I was hunting on eBay for something else, and came across this package. It was a little more than I wanted to spend, but it comes with a ton of extras, and I've been wanting this one for a long time. I know I swore I was done buying "toys", but this is something I can actually justify... I mean just LOOK how cute this kid is! 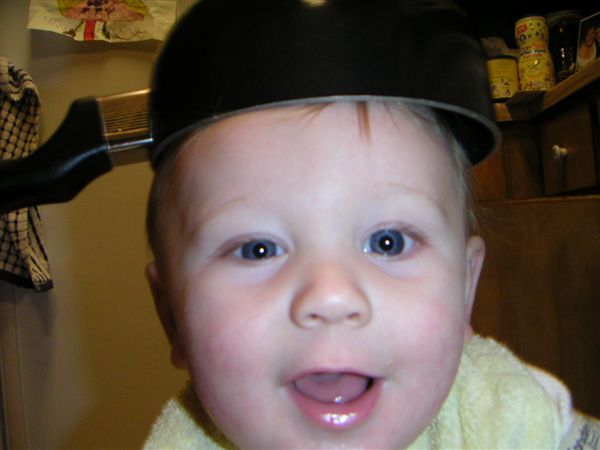 And now we're being told that they have "credible information" saying that an individual or individuals are driving around in black sedans and plan on "randomly attacking westerners".

I don't want to sound like I'm not concerned, or taking this lightly, but this is getting out of control. I was in Hawally last night; business as usual. There are rumors flying around, yet I ate dinner in Kuwait City, went shopping down in Hawally, then went to the Hard Rock Cafe here. All this "amidst an Embassy warning" ... blah blah blah.

These people are doing exactly what the terrorists want: to make everyone jump at shadows and loud noises. Terrorists get credit for every little "bad" thing that happens, and they're just sitting back and enjoying the fruits of old labor. Nice job people.

I have a lot more to rant about, and other assorted things, but I'm too tired right now. I'll try to post more tomorrow.

New Pictures are up!

... needless to say, 2004 was a banner year for me. The plusses outnumbered the minuses by a tremendous margin, which has not been the usual tendency for a long time. That's not to say some great things haven't happened to me in the recent past, but there was a close number of bad things, so when I took account at the end of the year, I could usually say, "well, at least I didn't lose an appendage" ... or something equally clever. Or not; your results may vary.

But as I sit here and type this (and I've spent a LOT longer thinking about what to say than you'll spend reading it, trust me), I can only think of ONE negative thing that happened in 2004 ... unfortunately it was for almost the entire year. I've spent it away from Shelley, and as of February 14th, Ryan.

Thankfully, technology (and my ability to use it) minimized that... or at least reduced the impact. Cell phones, e-mail, instant messaging, webcams, FedEx, etc ... I've got a webcam in Ryan's room, and I can check in on him whenever the urge hits me, and the network allows. As I've lamented here on more than one occasion, my connection to the Internet is tenuous at best, non-existant at worst. Sometimes I get really lucky and catch moments like this: 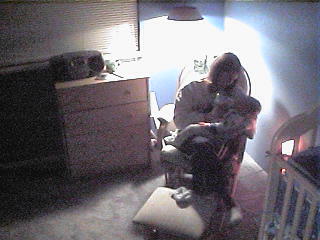 Most of my viewings aren't quite as memorable or meaningful, but that one speaks volumes.

So, just like last year, I vowed to never spend another Christmas away from home. The last time I said that, Shelley was alone, and didn't have such a huge reminder of me (other than her belly) around the house... this year she had a miniature version of me, but I don't know if that made it easier or harder for her. It's a subject we haven't really discussed yet... by mutual unspoken agreement.

Anyway, the whole point of this post is to wish everyone a HAPPY NEW YEAR! And to thank you all for the love and support you've shown me and my wife and son while I've been away. I get asked all the time, "Isn't it hard to be away?" ... and of course it is... but having friends and family that care really make it closer to being bearable.

Thanks again! Love to all! 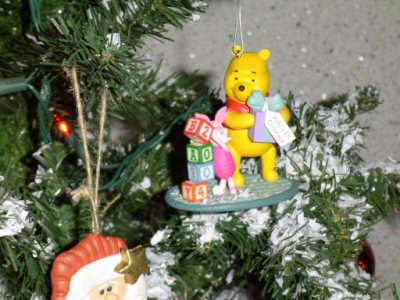