Now that I've finished Season 7 of B:tVS (Buffy: the Vampire Slayer ... in case you couldn't figure it out for yourself...), I've moved on to watching the first season of Penn & Teller: Bullshit! It was aired on Showtime last year, and it is just amazing. If you get a chance, I highly recommend picking it up. I'll be sending my copy home in a couple months, and you can ask Shelley to borrow it. I've already got season 2 pre-ordered... :) Check out http://www.randi.org for some interesting stuff from one of the debunkers involved in the show.

I've also been able to play Halo 2 a bit. *yawn* It's really nothing new. The first Halo was pretty good, considering that I'm not a big fan of first-person shooters on a console (PS2, X-Box, etc). But this one is nothing ground-breaking, just more of the same. All the hype in the media is courtesy of the marketing machine that is Microsoft. I've been more interested in playing the Tiger Woods golf game than Halo 2. There's a soldier at my site that's a big fan of computer/console games, and he has the same opinion. We're going to network our machines together, and try the multiplayer to see if our opinons change...

Ok, so that covers my video and games reviews. Other than that, all I've really been doing is working, sleeping, and eating. Shelley was going to get some pictures uploaded this weekend, but I don't think she's had the time yet. It snowed a lot this weekend, so hopefully she got some pictures of that!

I've got a few pictures to upload too, but that'll have to be later!

Hope everyone had a Happy Thanksgiving! Ours went off very well, with good food and a couple friends joining us. I cooked a 21lb turkey, and mashed potatoes, corn, cranberry sauce, etc... and here's the big news: I made gravy. That might be a simple everyday occurrence in your world, but in mine it rarely happens. My mom can attest to how many times I've called her for "gravy coaching". For those of you that have never had my cooking, I would not be exaggerating when I tell you I'm a fairly good cook. Ranging from "Creative Bachelor Cooking" (ie. ramen noodles mixed with ... well, whatever is in the fridge) to "real meals" - like Thanksgiving dinners. For as long as I can remember the Thanksgiving meal has largely been my job to prepare. Which is fine, because I really enjoy cooking...

However, gravy has always been a problem for me. I have "cheated" on more than one occasion in the past by using powdered mixes, or bottled/canned gravies... They've never REALLY quite tasted right, but it was the best I could manage. Most previous attempts just failed miserably. I felt I had some kind of gravy curse...

But yesterday the curse was lifted. I tried everything to avoid the actual gravy-making process... I looked ALL over for my usual poor substitutions. When that didn't work, I quizzed all the expected attendees to find out if they possessed any gravy-making skills... no such luck. So I enlisted Mike as my recipe-reader, and we deciphered the instructions for gravy included with the Butterball turkey. The results were as close to perfect gravy as I have ever had. It was a little salty, but that's ok sometimes too.

I had to fly down to Bahrain last week for my Visa again ... they require a medical outside of the country, then you come back to Kuwait and have another one done here... I don't understand the reasoning, it all sounds like a big scam, like most all the other processes in this part of the world. I did get a few pictures this time, but nothing overly exciting. The trip was just overnight, and as I've become accustomed to, disorganized. The people that our sponsored hired to handle the arrangments for us in Bahrain dropped me off at a hotel after the medical, without any real explanation as to when they will be picking me up the following day to go to the airport. When I went to sleep that night, I put the "Do Not Disturb" sign on the door... so of course at 8:30am there is a pounding on the door. When I answered the door it was one of the drivers, who says he needs my airline ticket. I asked him why, and he said they needed it for the paperwork... When I gave it to him, he literally ran away. I decided to check out early, and meet a few of the other people that were there for their Visa's at their hotel for lunch. When I went to checkout, they told me that they had given my passport to the driver, and they asked if he had called me yet. So now I was even more pissed. I hadn't been given a time, he took my airline ticket, my passport; and now I needed his permission to checkout. I called him, chewed on him a bit, and left. 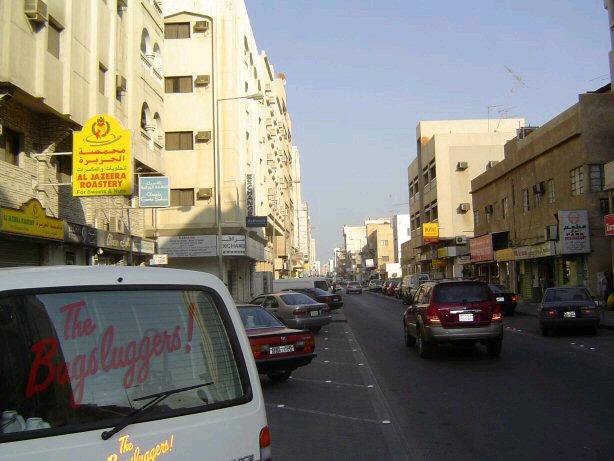 I'm still not sure if that's a Bug Slugger or Bugs Lugger... neither of which makes any real sense... 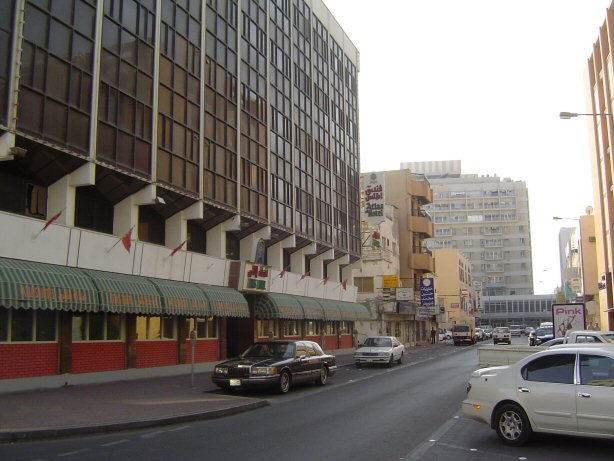 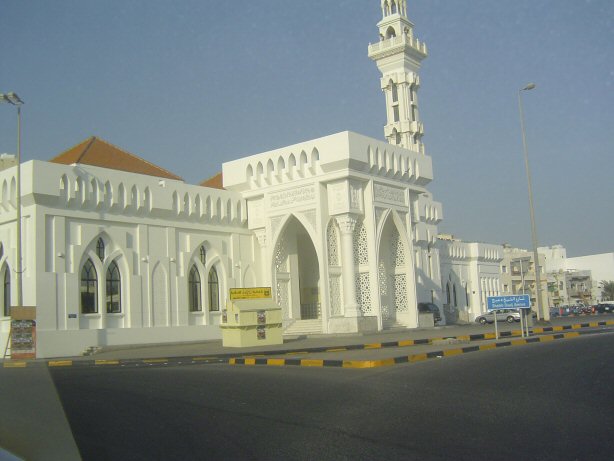 A eye-catching mosque... usually they're a little less... umm... clean, on the outside.


Ok, I'm going to go have some leftover turkey (and gravy), and watch some more Buffy:the Vampire Slayer. I just got the last season on DVD, and I'm anxious to see how Nathan Fillion did as a bad guy. Apparently he was the "scariest bad guy ever" on Buffy, according to hard-core fans. (Fillion is Captain Malcolm Reynolds on Firefly... a show I've ranted about before)

Speaking of Firefly, the movie's release has been delayed for 5 months. Apparently Universal though the original April release date was going to be too crowded with similiar films, and that a summer marketing campaign would really bolster sales... Personally, I think the ACTUAL MOVIE being in the theatres would be the best summer marketing, but maybe I'm just naive about how that kind of stuff really works... Oh well, now it's coming out in September, and will be a nice birthday story for my 'blog. 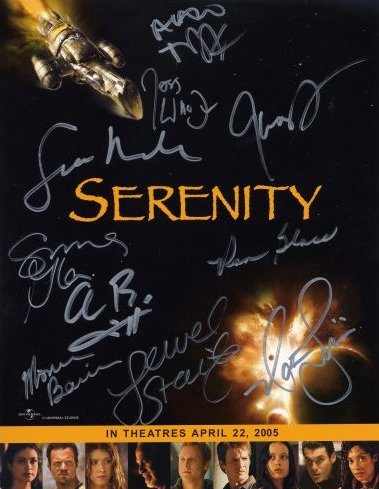 Just a quick post to let you know that Shelley updated the Grattan 'blog. For some reason I thought he was 24 lbs and 24 inches... Guess he'll get there soon enough! hehe

... just wanted to share with you some great pics that Shelley sent me. They're in the photo album too, but I thought you might like to see them here. Even if you don't want to see them, I really don't care. My website, my rules. :P 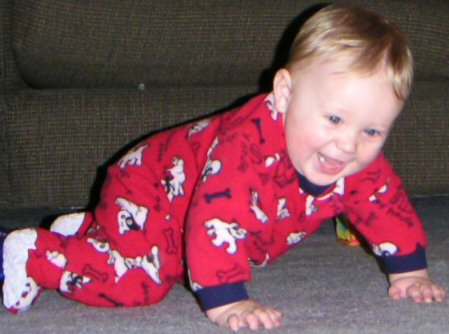 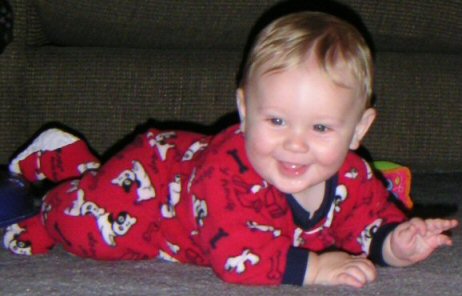 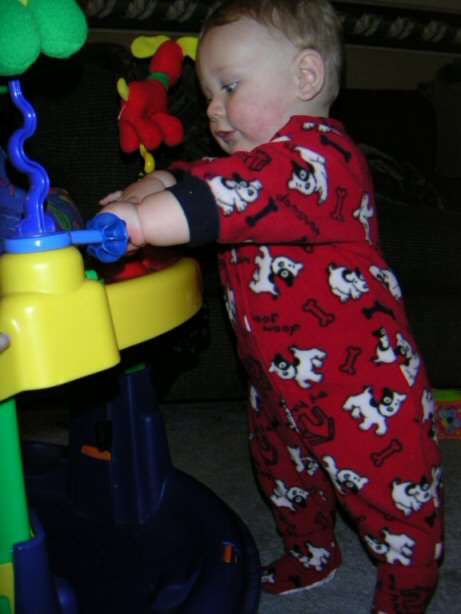 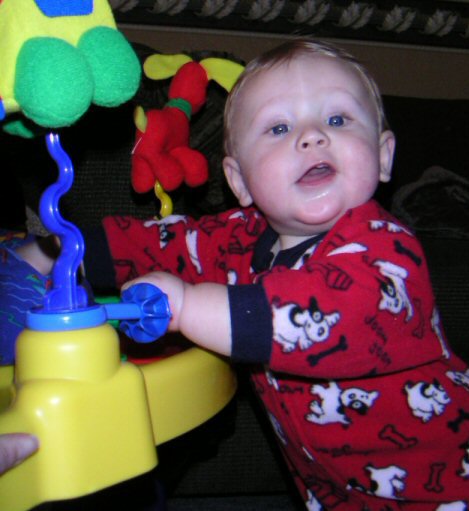 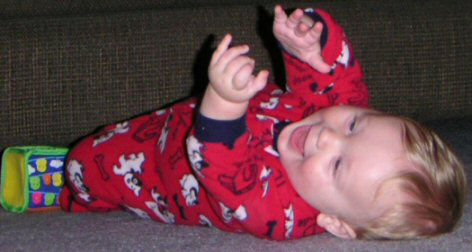 Shelley uploaded a bunch of pictures, so the GRG Album has grown by about 30 pictures, and there are a bunch of others in the Latest Photo album as well. None of the house yet, but she said she'll get some this weekend.

I walked one of the big Navy ships tonight, and Mike (one of my co-workers) gave us some insightful info regarding the Apache and Black Hawk helicopters that were in one of the holds. We got a couple of pictures, and I'll get those uploaded later...

Ok, so I did a couple things I've been meaning to do for a while now. I cleaned out the Latest Photos album, and updated it with what is ACTUALLY recent photos... I also put every picture we have of Ryan in the main album of him, cleverly called Geoffrey Ryan Grattan. There's a total of 354 photos in there, some of which are probably duplicates, but also a few you've probably never seen (because they've never made it to an album before). That should keep some of you people that keep bugging me for pictures of Ryan off my back. Believe me, I know you all come here for the pictures of the kid, not to listen to my witty observations. :P

My trip back to Kuwait was uneventful, for the most part, especially if you compare it to my previous trip from here... Even though I missed my first flight, was holding the same seat assignment as another passenger on the next flight, my boarding pass was "rejected" on the last flight into Kuwait, and I sat next to an insanely neurotic man for the five hour flight when I was eventually allowed to board... None of that compares in the slightest to my "Wardrobe Malfunction Flight".

So I'm back; been here for a couple days (seems like a week), and rapidly settling into my old routine. The guys I work with did an incredible job maintaining the site, as well as improving and expanding. It seems this site will transition to a more permanent setup, with buildings, instead of tents (!), and they all did a terrific job dealing with the inevitable pandemonium. Unfortunately, I made it back just in time for even more expansion... another month or so and I might have missed the fun... wouldn't THAT have been a shame!?

All those photos we've been promising to get uploaded? Ummm.. yeah... well, they're still on the way. I uploaded several before I left, just need to get the albums in order for viewing. I'd ask Shelley to look at them, but she's still digging out from the move. I just barely managed to make enough room in the garage to park her car ... errr... truck... ummm, well what the hell DO you call it? It's really too small to qualify for SUV (in my opinion), but it's bigger than a car... doesn't really qualify for truck status, and definitely not a mini-van or station-wagon... is it a mini SUV? I don't know... I'm just going off on a tangent here... Post your suggestions, will ya?

I also wanted to post my condolences for the passing of a friend's father. I haven't had an opportunity to speak with John for several years, and learned of his fathers' passing through another friends' website. I barely remember John's dad Leo, but what I do remember was a man that will be sorely missed by many people. Sorry to hear about your loss John, and know that I'm thinking of you and your family half-way around the world.

Love to all, and rest in peace Leo